While not as visited or as well know as Joshua Tree, the Mojave or Death Valley, the Anza Borrego is in every way just as beautiful. Spread throughout this vast area are multiple landforms and climates. From the Laguna mountains where snow cakes the ground in winter and the winding pine filled valleys surrounding the road to the miles of desert flats leading to the Salton Sea, the largest body of water in California. This is a fantastic day (or night, whatever your preference) trip from the San Diego area.

The Sunrise highway is one of my favorite roads. The drive is smooth, fun, and the views are wonderful. The drive can last for hours if you want it to, and there is a different view to enjoy at every turn. In the summertime at night the air is still very warm, upwards into the 70’s so you can roll those windows down as much as you like. In the winter however the higher elevations get a decent amount of snow.

To get to the Sunrise Highway-Take Highway 5 North (LA) Out of Downtown and take the exit to Interstate 8 East (Mission Valley/El Centro) Stay on Mission Valley for a good long while (I’d say about half an hour maybe 45 minutes) until you take the exit for County Road S1 aka Sunrise Highway. From then on its miles and miles of forests, hills and overlooks into valleys and canyons.

Just after driving up and through Mt. Laguna, you’ll be driving through hills dotted with forests of charred trees from the Cedar fire that scorched much of the forests, leaving an eerie yet serene landscape.

The Sunrise Highway eventually ends by connecting to highway 79, where the road leads into the small touristy mountain town of Julian.

from there you will have two choices: turn left to enter the town and grab a bite to eat or take a right and continue on the road through mountainous terrain into the Anza Borrego Valley.

Alternate Route to Julian: If you’re a little pressed for time you can take the faster road of Highway 79 to Julian. The road is a curvy, uphill drive. After about 20 minutes, the road flattens out and you reach the plains surrounding Mt. Laguna.

On approaching the mountain, 79 hugs the shore of Lake Cuyamaca, for which the town is named after. It is a serene place, especially in winter when surrounded by a snowy landscape. Cuyamaca itself is not really a town, more a vacation community for the summer crowd. Still, it is a picturesque place.

The drive continues on 79, snaking around Mt. Laguna as the elevation climbs further until you are driving along the ridges to Julian. About 6 miles outside of the town, there is a scenic overlook where you can see the surrounding landscape for miles and miles. On a clear night, one can see the moonlight faintly glimmering off of the Salton Sea.

Highway 79 comes to an end on the town limits of Julian. There are two roads, one leading into town and down the mountains to the coastline, and the other turning directly East, descending into a series of valleys that eventually reach the flatlands of the Anza-Borrego desert. This is Highway 78, the road to the Salton Sea.

As you turn onto 78, the road quickly takes a sharp turn downward into a series of ravines. The dark outlines of the surrounding cliffs appear menacing at first, their sheer size and magnitude are almost overpowering as they appear ready to fall on you at any moment. The smell of pine sticks to you like sap and the cold pockets of air are crisp, snapping you out of any fatigue you might have been feeling up to now. Depending on how quickly your car reacts on turns it can be quite a ride, though keep in mind that there’s no cell service out here, and rarely will you see another person on this road late at night.

Eventually, Highway 78 reaches the bottom of the ravine and enters the valley. passing through it you find yourself in a completely different environment, driving on a straight path through the vast openness of land that is the Anza-Borrego desert.

The road here stretches onward for miles and miles, dipping and rising through occasional slopes in the terrain but otherwise unbending. Stopping on the side of the road, the silence is almost overpowering, with not even the sound of a breeze coming through. Everything is absolutely still.

Following 78, You can either choose to take the road left into Borrego Springs and from there take the Borrego-Salton Seaway which leads directly to Salton City. 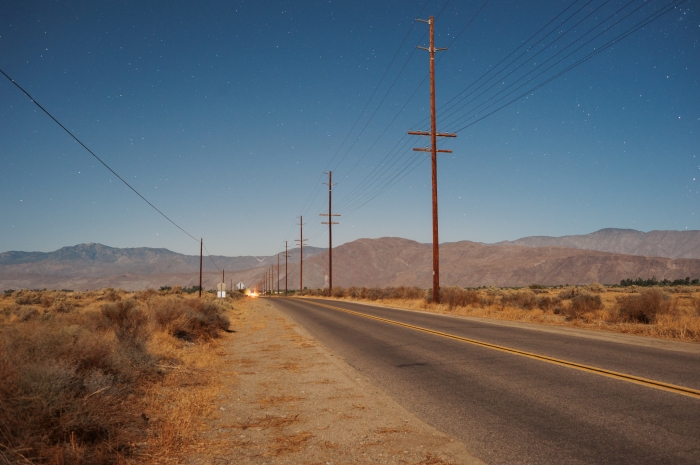 Otherwise, continue on the long stretch of desert. 78 will eventually terminate at the crossroads of highway 86 where you will take a left, turning north toward Salton City. After a stretch you’ll see the signs for it on your right.

Located 100 miles East of San Diego in the Colorado desert, The Salton Sea was created in 1905 from a period of heavy rainfall that overwhelmed irrigation canals stemming from the Colorado river, carving two new rivers from the Colorado itself. This water continued to flow into the Salton sink for nearly two years before engineers could stop the flow, and due to there being nowhere for the water to drain (the Salton Sink itself is only a few feet higher in elevation than Death Valley) the waters created the largest lake in California. In the 1950’s  real estate developers worked hard to make the Salton Sea a resort destination as popular as Lake Tahoe, laying streets lined with palm trees, stocking the sea with millions of game fish and dredging marinas complete with hotels and restaurants to accommodate vacationers. However, little attention was paid to the health of the Sea itself.

Over time, chemical laden runoff from the surrounding agriculture of the Valley paired with rising salinity from evaporation polluted the Salton Sea. By the 1990’s fish and birds washed ashore in die offs numbering in the millions, creating a permanently foul stench in the air. Salton City and many of the Sea’s surrounding communities were largely abandoned to the elements. Much of the layout of the planned city and other communities that never came to be still remain, with unfinished houses lining streets leading nowhere and salt encrusted marina docks over dry land. Despite its current condition, or perhaps because of it, the Salton Sea is to me one of the most hauntingly beautiful places there is in California.

I was on my way to the Salton Sea when I took a wrong turn off of 78 onto this road, and it having been awhile since I drove there I decided to keep going. It Didn’t end up taking me to the Sea, going almost directly South as it does, but i was glad i took the turn afterwards.

According to the Federal Highway Administration, The Great Southern Overland Stage Route (also just called the S2) was once a dusty trail used by the Spaniards when they still had control of this land in the late 18th century, and was used by Mexicans as a mailing route shortly after their war of independence from Spain. Mexican American War General Stephen Kearney used this trail to lead the Army of the West into Mexico, and miners used it throughout the gold rush period. Hell, even Mark Twain travelled on it in a mail wagon and wrote about it in his 1872 book Roughing It.

After driving for almost an hour I came over a rising and saw in front of me dozens of blinking red lights in the almost total darkness. I realized I had definitely taken a wrong turn and half expected border patrol to show up at any moment to ask why I was driving on a back-country road in what looked like a stolen car near the border at three a.m. That didn’t happen, but I did find out that the blinking lights were windmills turning silently in the early morning. It was quite a sight to see.

Home to Salvation Mountain, Slab City is..well, unfortunately I’ve never been there myself and don’t want to write about what I don’t know. Just read the wiki page on it, or watch this video vice made. I wager you’ll want to check it out yourself.